There is one good thing when coming back from Asia. Finally I can tell you, my dear readers, the truth about this country called Korea without any fear of being prosecuted, ha! So here come all the dirty secrets I was too afraid to write and the truth beyond all these blog posts of the past. But if you aren't prepared of the sincerity in all its glory I'd recommend you to stop reading now.


You should really stop reading now.


Think about all these miracles in your life, back in a moment where everything seemed perfect but then somebody really destroyed all the magic, beat all the feelings out of your fragile little heart with a sledgehammer representing the dark cruel world we're living in, picked up the shards of your still-beating-but-it-was-a-little-heart-some-seconds-ago and forced you to choke on them while you tried to cry for help but you couldn't because you were actually choking on the bloody shards of your it-beat-some-seconds-ago-but-now-it-is-a-little-mess-instead-of-a-little-something-i-don't-even-remember-the-word-for-it. When you continue reading it will be worse.

Just stop reading. Easy as that.


Okay. But first of all let's have a conversation. Just testing if your're ready for the things you might read and see in the next few minutes that will feel like weeks and years of never ending pain for you. Did I mention that it might be a good idea to stop reading NOW?

Did you answer the question? Of course you didn't. This is not the way how it works! So once again: What's your name?

That's an interesting name. I knew somebody with the same name some while ago, but now this person is different. In fact, this person doesn't even remember its own name (I call this person "it" as nobody knows about the gender of this person as it is getting lost in its own state of neglect) and i think the person is naked all the time, but I can't tell because of all the dirt on its body and I can't ask as it is not reacting to anything. You want to know a disturbing fact? This person is you when you continue reading!

Ahhhh... still here? So... what did I want to write about? I forgot. Maybe because I will lose my mind if I continue making progress in the very wrong directions. So...


Let's make a deal, okay? I'll show you some pictures of British television. You'll like them. And then you'll forget about anything you read before. Specially about your curiosity. Here are some dogs for you. And they are very colorful! 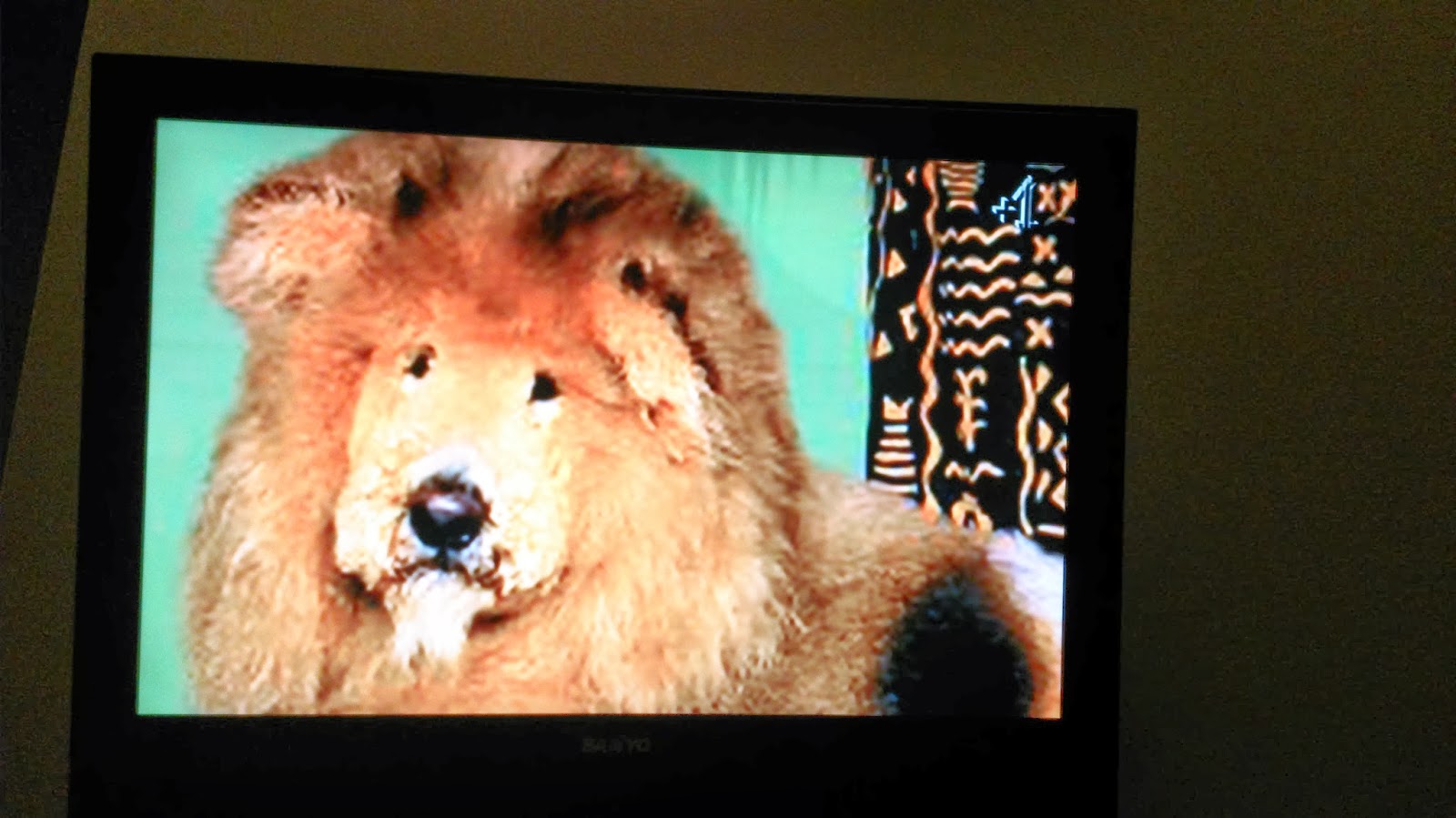 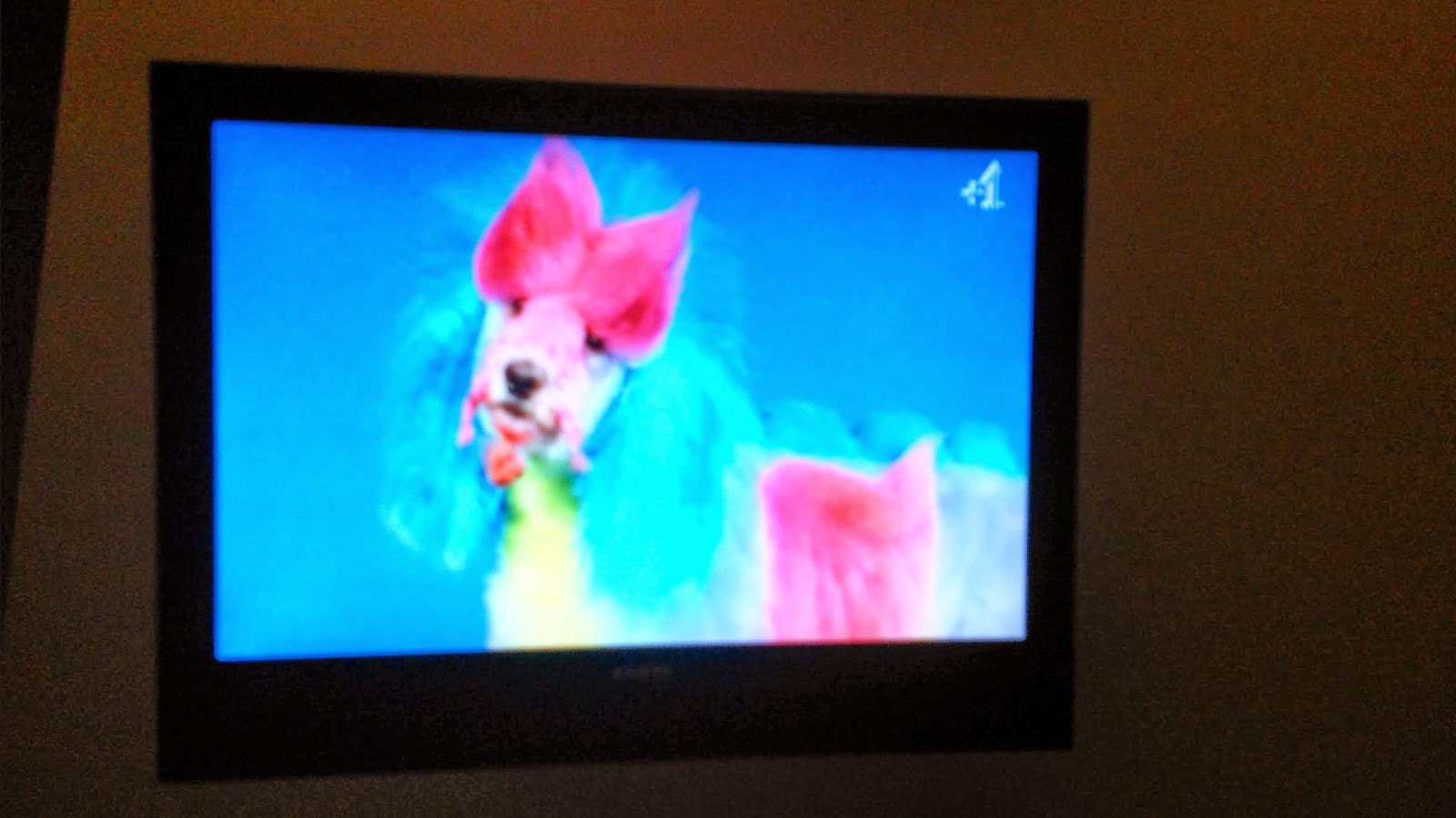 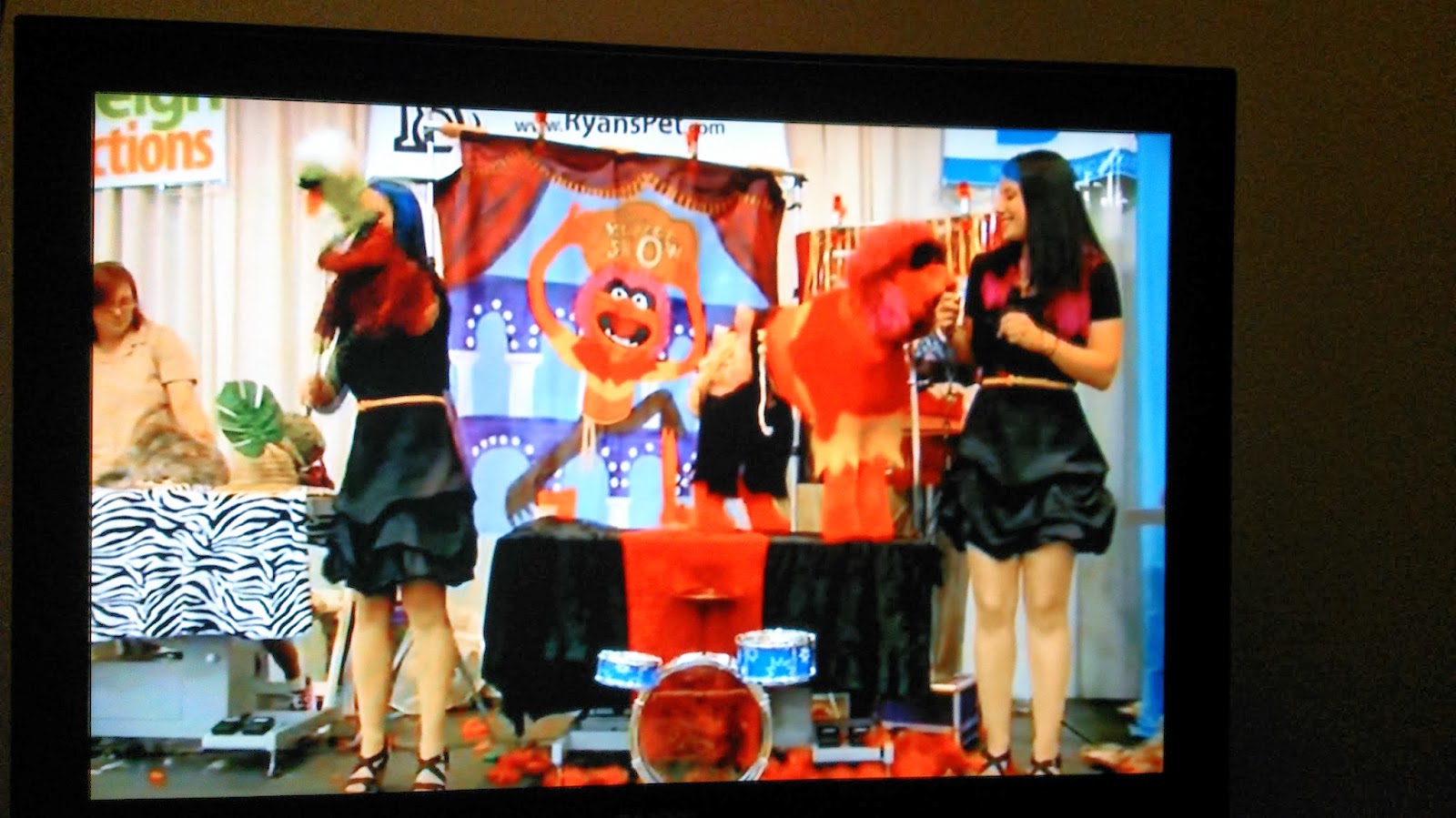 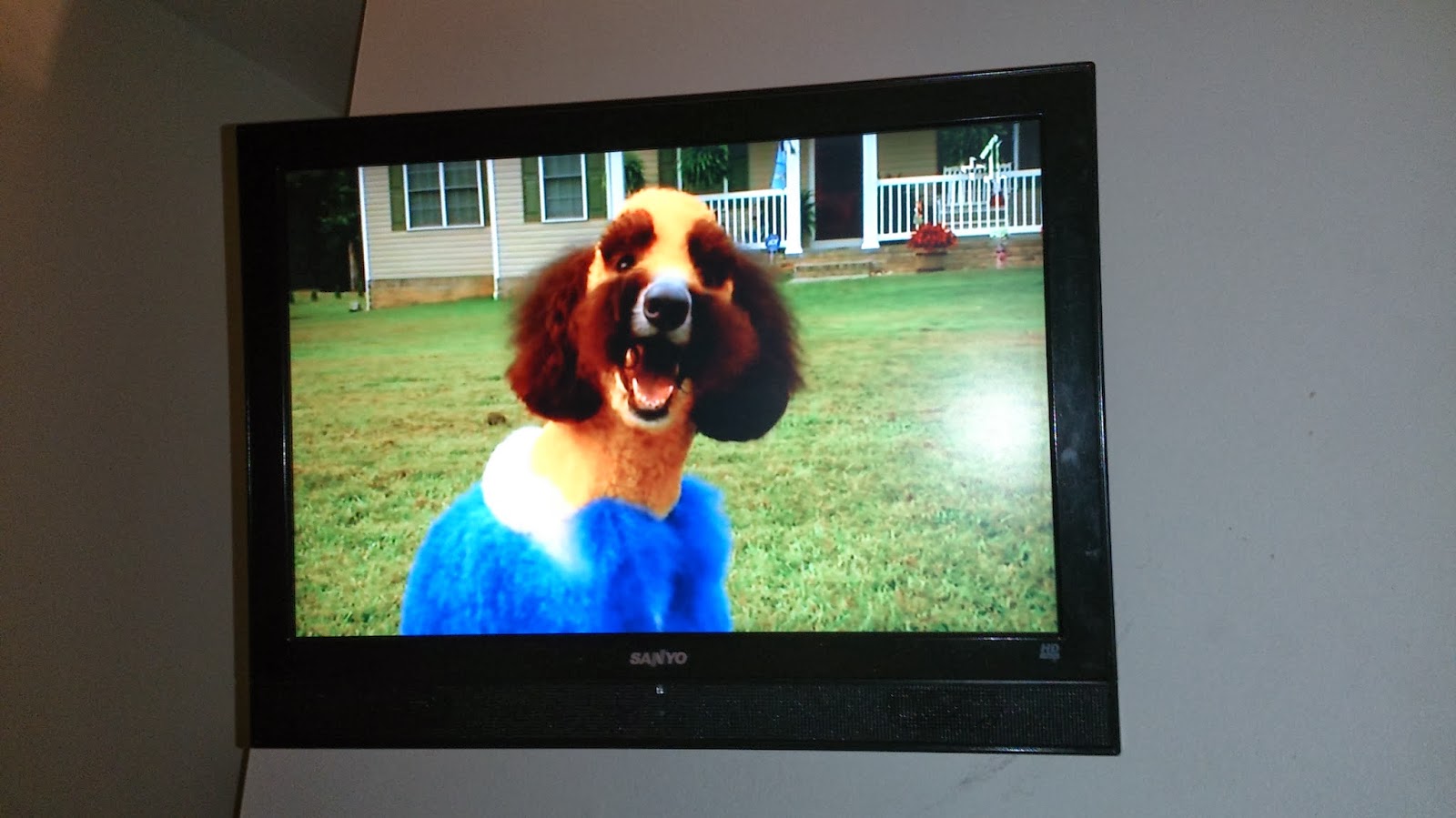 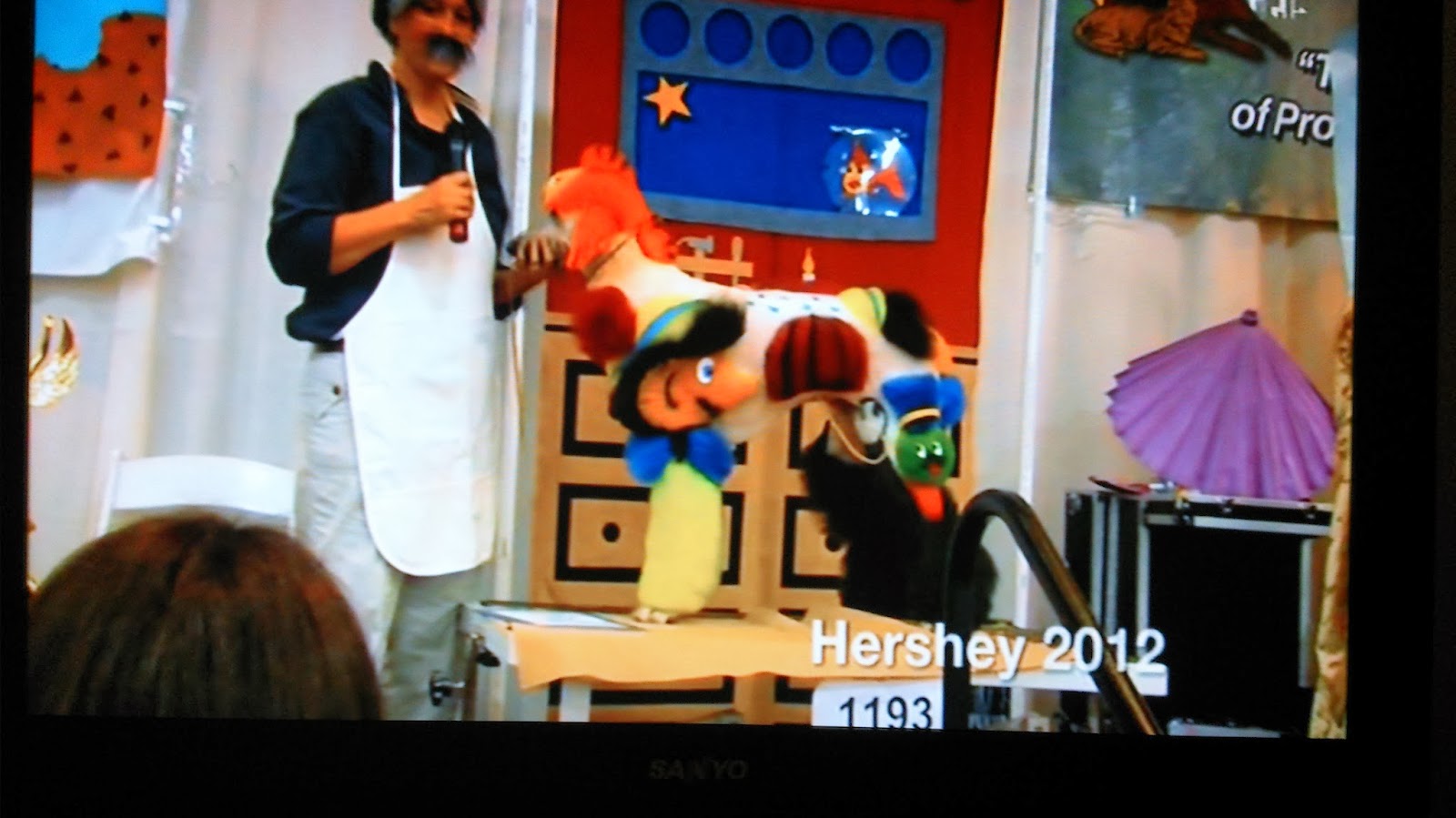 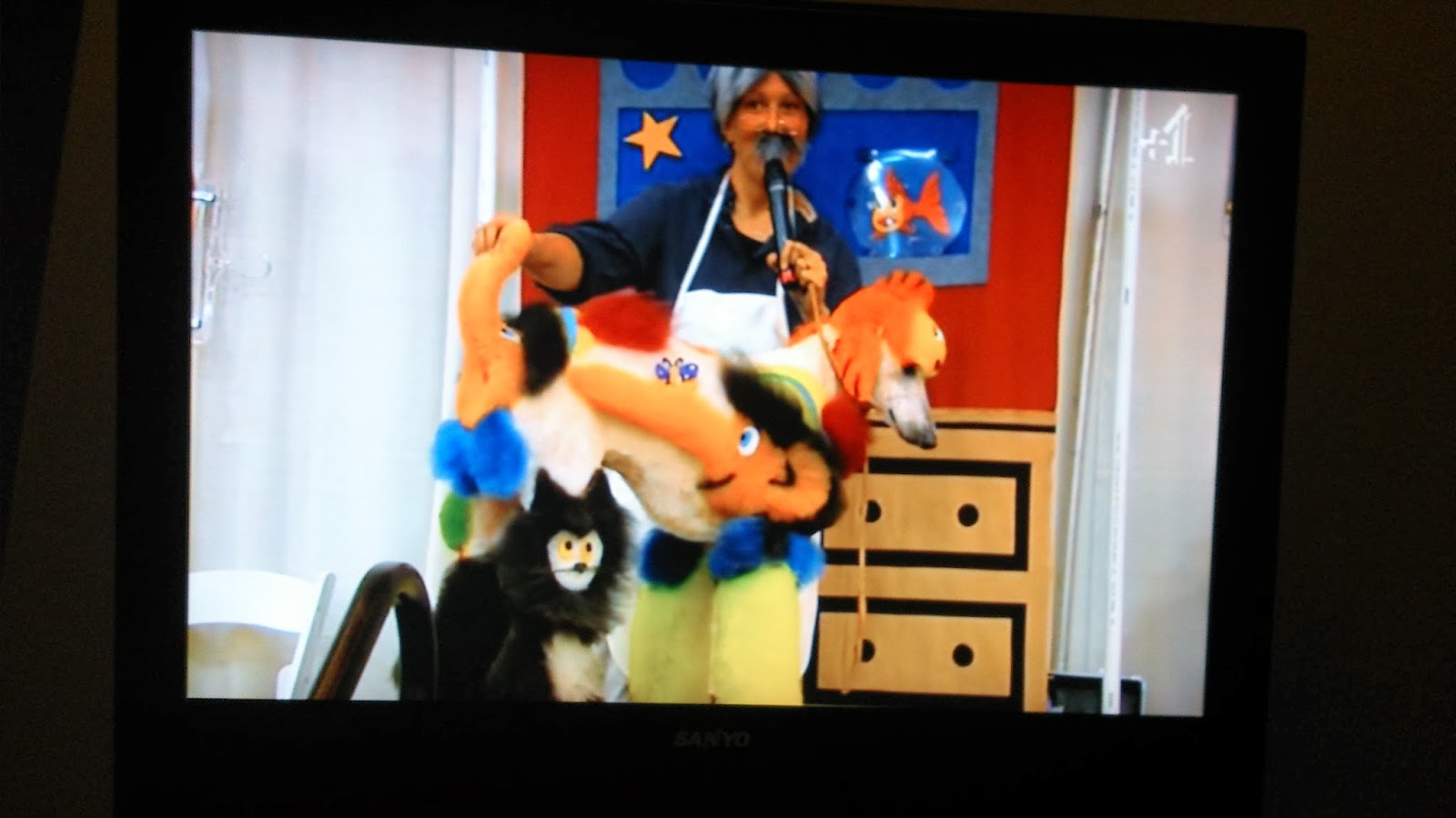 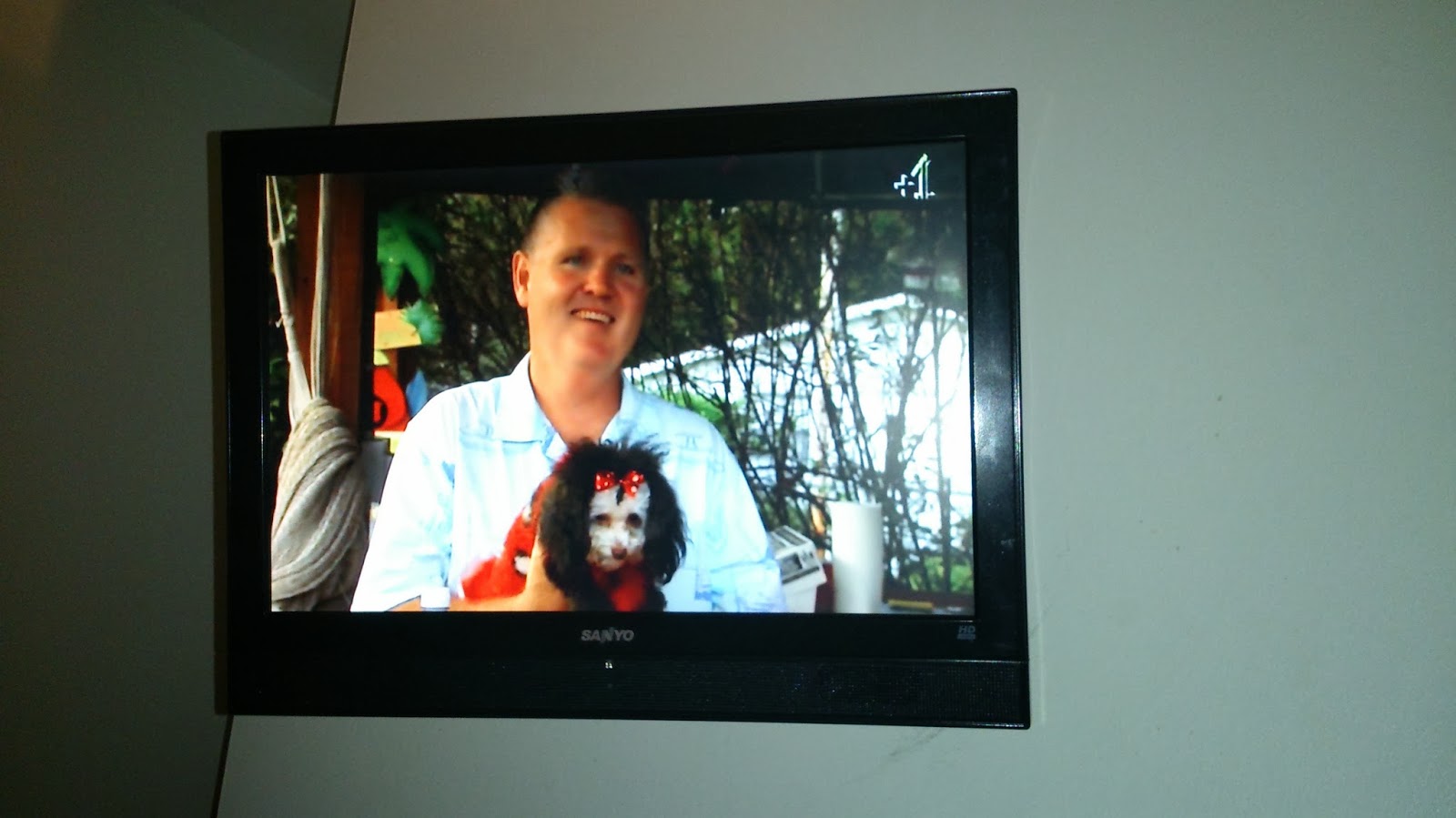 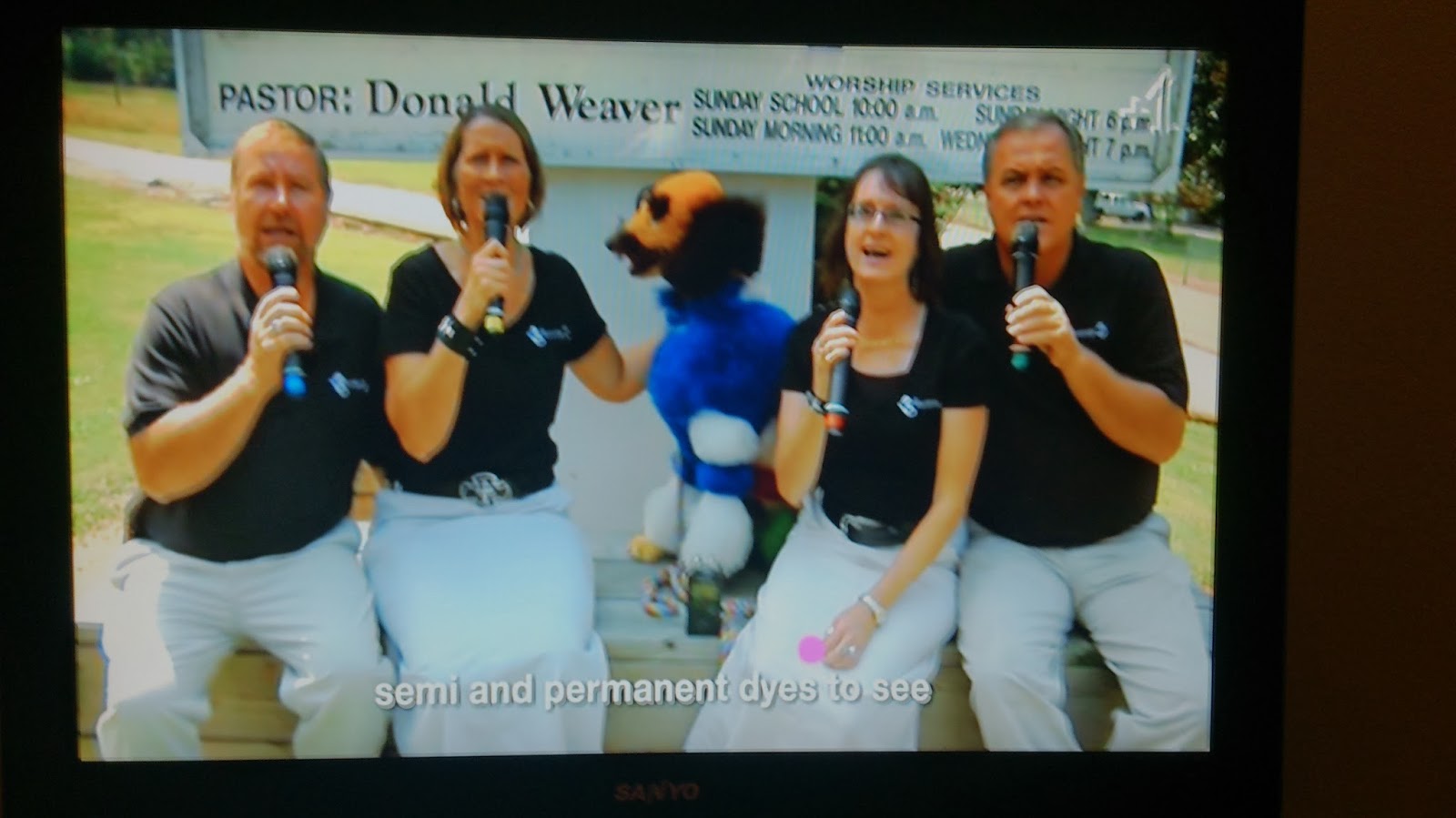 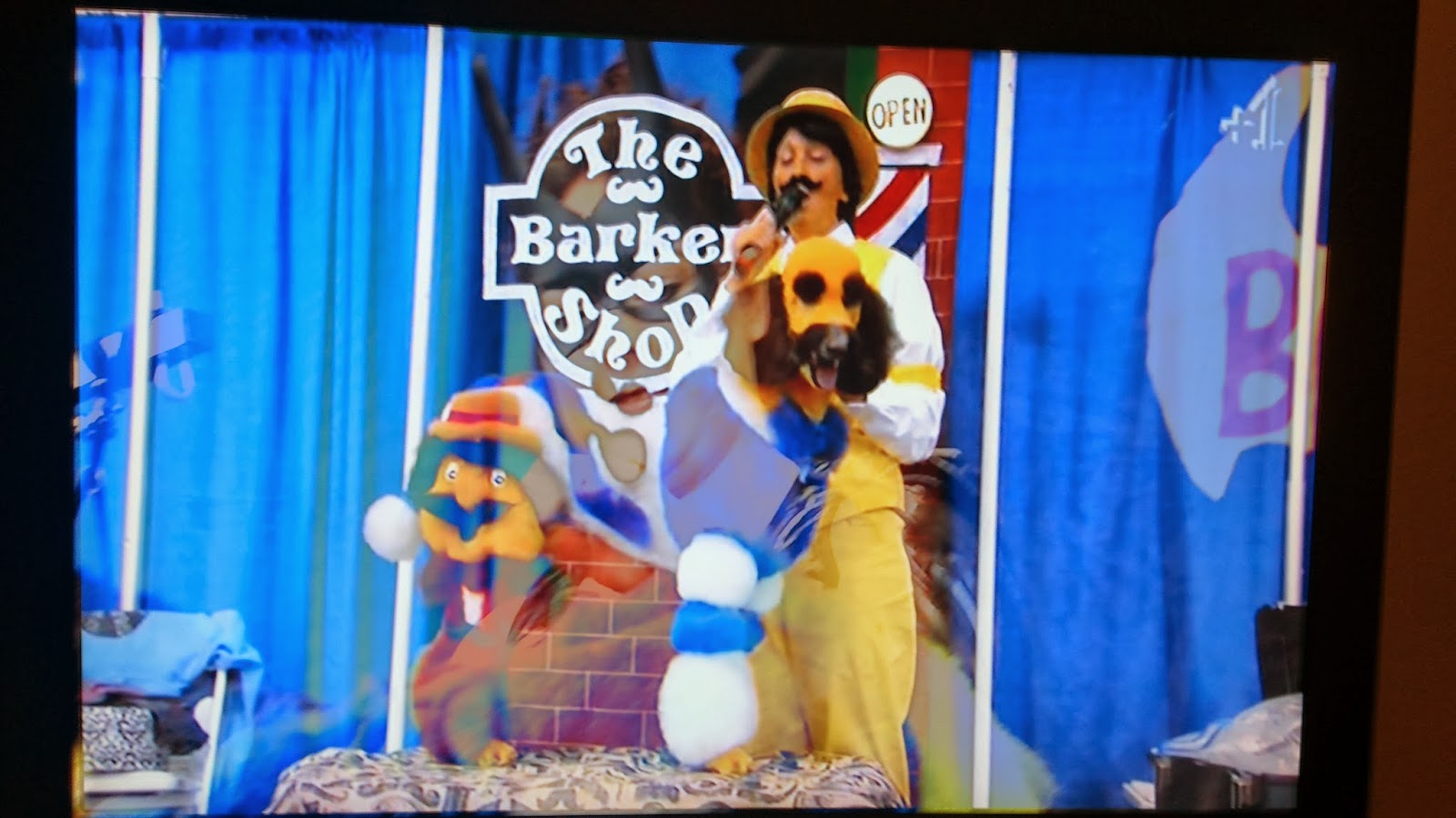 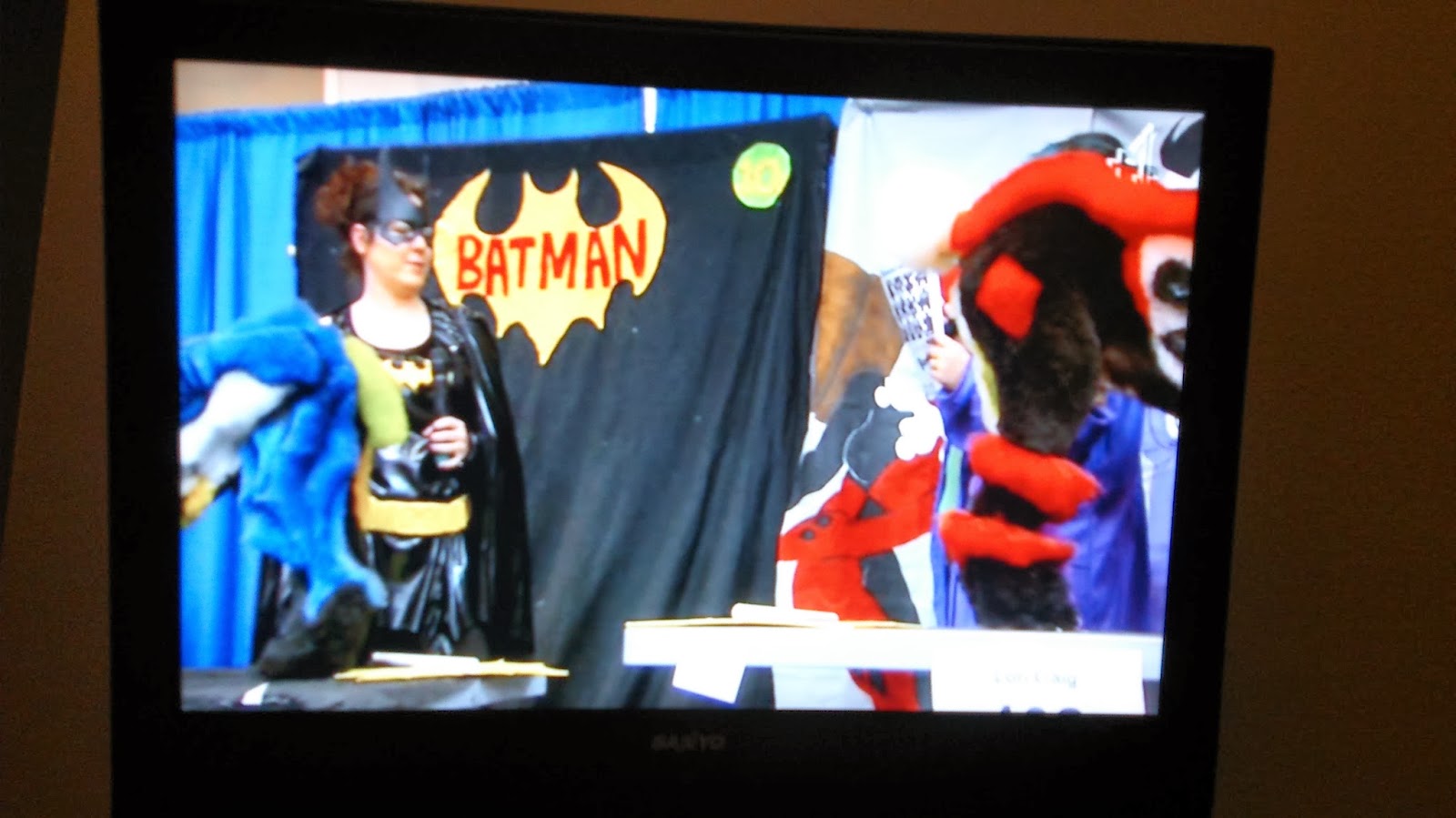 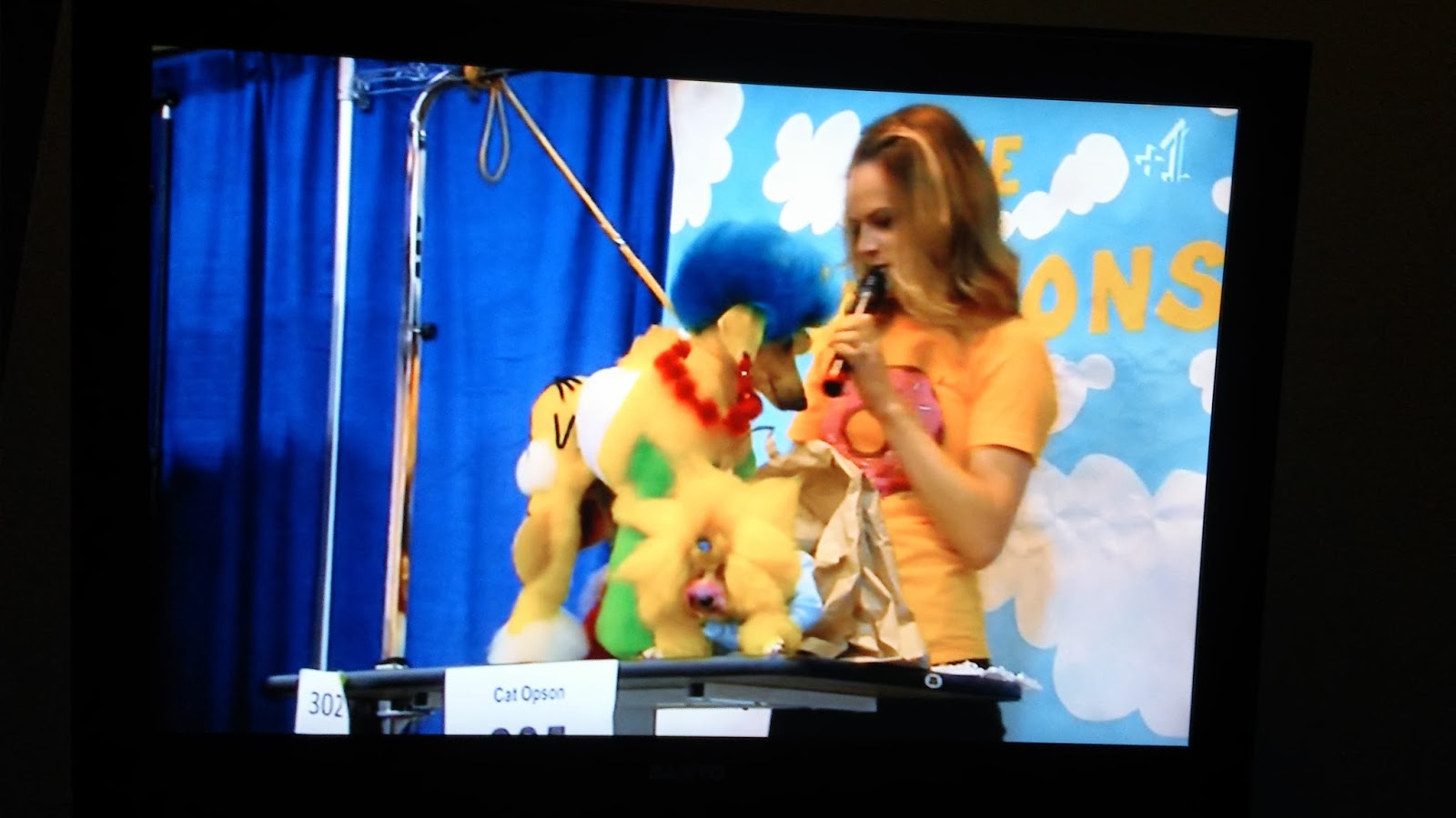 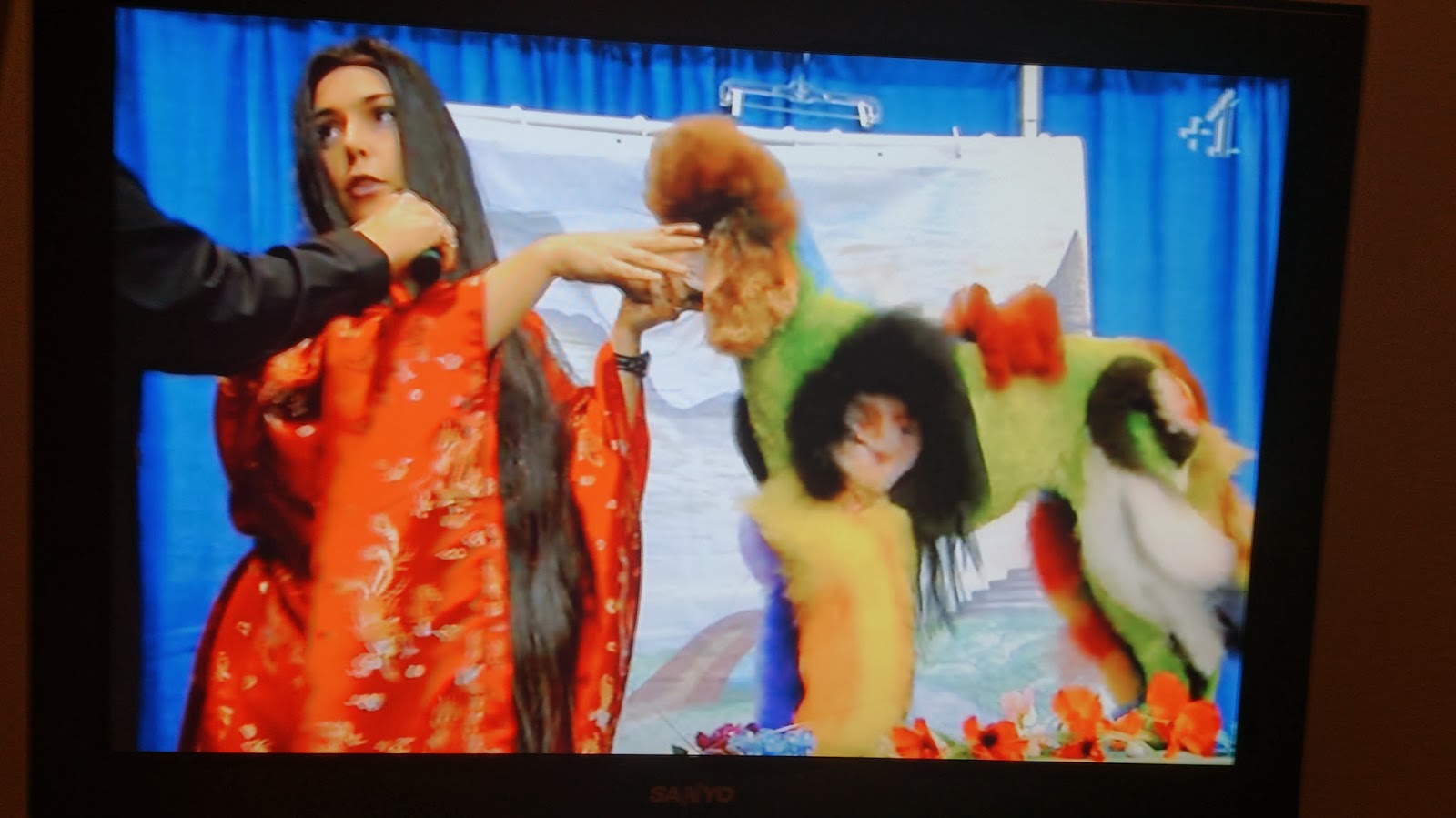 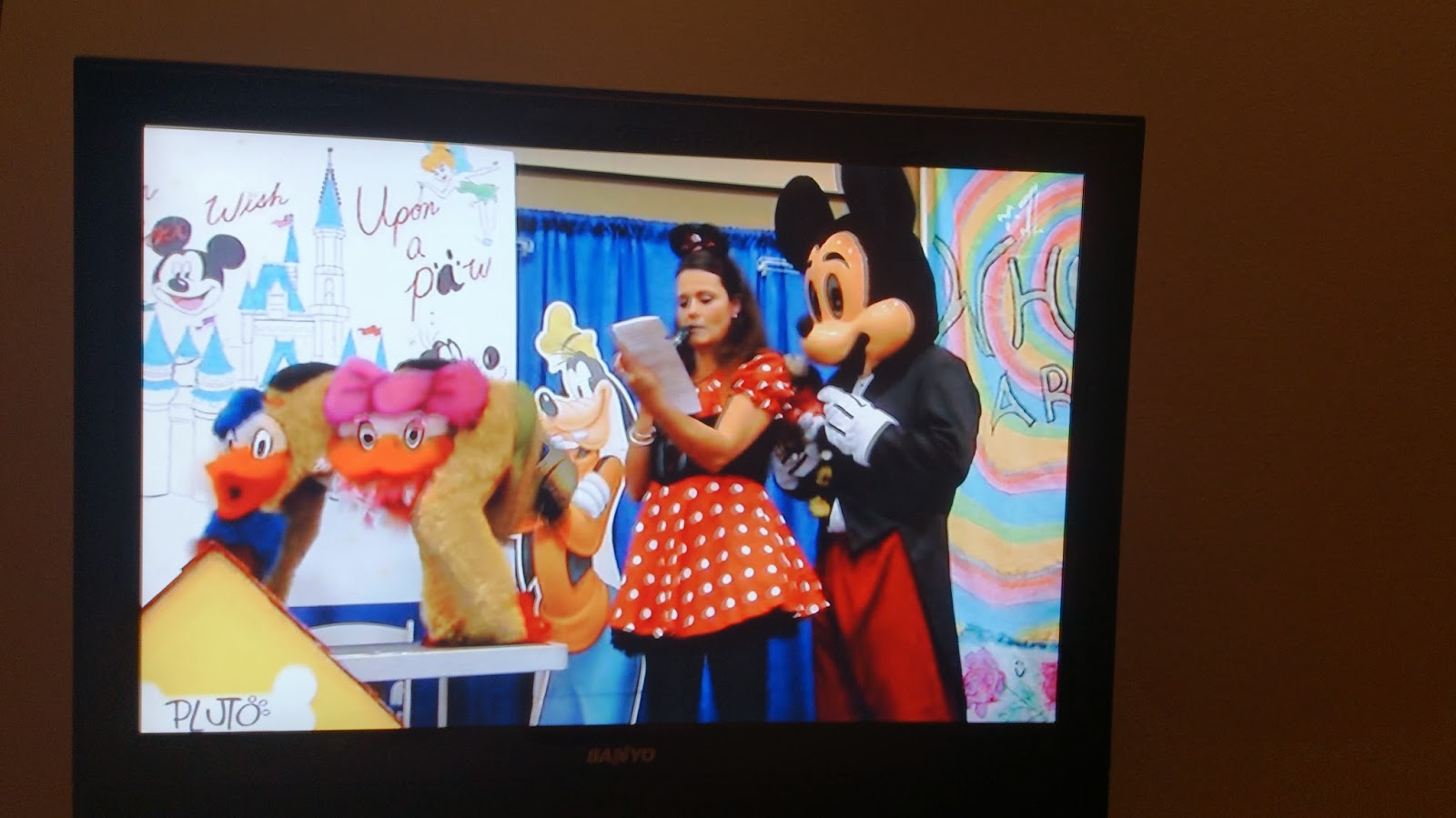 When going to Japan there are important things to bear in mind when checking in to random places:

First of all better deposit an important thing in a front. My best guess would be your wallet good visible to everybody that the hotel inside of a hall may suit itself with theft, loss, breakage, etc. while taking no responsibility. A hotel hall putting on a dress consisting of theft, loss, breakage, etc. while taking no responsibility for stealing your most important thing in front might not sound so trustful, but this sentence is also open for lots of interpretations. Maybe it's about marriage? Or taking your virginity? Or "front" is some name for an unknown place of wealth and wisdom? Who knows?

Attention! The owners of this place do not even eat and drink, they even refuse it hard! And they smoke in a prescribed place! A clear sign of vampires going up in flames when exposed to sunlight and in urgent need of your blood for making a living. And your phone doesn't seem to work as it is refusing all and only communicating with the reception desk. As you're also unable to call for help you should better keep some healthy distance between you and these mysterious creatures.

Okay, this is an easy one. The man isn't allowed to put it (most likely the important thing in front) in the female zone and vice versa. Don't know why they wrote this message, maybe just for being sure that you're depositing an important thing in a front. Thanks god there's the "common zone", where you can "interview" the man's or the woman's "it", which is most likely not Irezmi etc. and drunkenness as they tend to refuse the use of this hotel. But - again - not as hard as the owners of this place refuse to eat and drink. So please be careful!

Okay, another trace for vampires! And again they are writing about themselves refusing eating and drinking (at least not hard) and writing about "restaurants" on a sign with red background. RED! And then this keyword "one story beneath ground level", most likely talking about their coffins and stuff. So again: Keep your distance.

And maybe these creatures are disguising themselves as "doors" as the man's locker room appears to be their back. And I really don't want to go into detail about this. Only one suggestion: Keep your distance. Did I mention that? 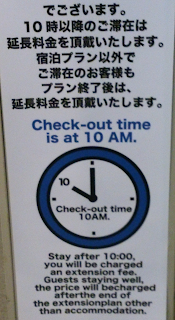 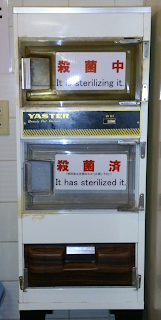 Here's the hint about an extension plan for check out. I think this plan doesn't exist as it only seems to apply for guests "staying well" and according to previous insights this might be unlikely. And their are also having machines with the mysterious functions of sterilizing "it" and having sterilized "it". Maybe they mean the projection thing again hiding inside this machine of the hotel hall suiting up with theft, loss, breakage, etc in the back of this "door"?

Japan is too confusing.
Posted by Unknown at 7:31 AM No comments:

A (sad) story about ponies

Imagine a world full of sad ponies, because somebody has eaten their legs and now they are crawling on the floor like helpless seals. And the unscrupulous monster addicted to pony legs also loves to eat their hearts, which in fact really really sucks. Then as you know, my dear readers, the world only spins because of the heartbeat of small ponies. And the less pony hearts are in active usage, the slower the world will turn around its own axis and the more countries have to stay in complete darkness which leads to a delay of seasons and will let the weather go crazy! But this is not even the worst thing!

Because when we'd refuse these wonderful pony legs and hearts to these monsters (since I'm here I'm somehow bringing this word in connection with Japan or North Korea and I somehow don't know why) they'd go crazy because of their strange addiction to pony parts and even this random army of people in blue coats wouldn't be able to do anything against it:


It is a sunny day, but they have no idea what is waiting for them...

But now back to the side effects of the loss of pony hearts. Because of all the reasons listened up in the first paragraph there will be no snow when the people in this wonderful country would like to go skiing. But thanks to highly advanced technology nobody really cares:

Snow? Bwahahaha! We make our own!

Overall, all these assumptions lead us to the following research question: Why is the world spinning because of pony hearts? We'll see, my dear readers, we'll see.

You can also buy socks in Korea.

Clever thinking of the economy as it is getting colder. Unfortunately you can only buy those serious business man socks. I can illustrate this statement with an example: 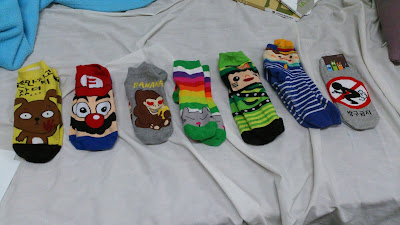 And now back to serious field studies!
Posted by Unknown at 2:06 AM No comments:

It has been a while since my last update about scientific problems in Korea. To be honest, during the time of not writing anything I had the most craziest experience of my lifetime. But as it is in no relationship with the awkward shit I experienced precisely two days ago I won't mention it right now. I have one single question - and it is a really simple one: Do you know who Jack Nicholson is?

Most Koreans don't. And this is driving me more crazy than any Laser-in-your-eyes-if-you-are-doing-anything-wrong-lots-of-pain- or I-can-make-random-lollipops-out-of-balloons- or there-is-a-crazy-performance-with-I-do-not-know-things. So please encourage me. Tell me that you know Jack Nicholson. In your comments. In love letters. Or anything else. Then you might get some real updates. With really crazy shit. Promised. But please encourage me now and give me back my believe in humanity.
Posted by Unknown at 8:29 AM No comments:

Back to scientific problems...

Continued working on my paper with the question Do Koreans know how to party? (see some previous entry). Over the past few weeks I proceeded with field research by stumbling into random spots. To lower the tension (as this is serious scientific work and no essay about adventure): There is still no clear answer to this question as I'm trying to work on this paper on the most scientific way possible. So further resources are still necessary. But before I start to prove certain things I will share very important wisdom which is unavoidable when conducting data in crowded places.

Here is the answer to the question How do I go to the toilet in the most efficient way? You could of course use algorithms like A* search to achieve satisfying results but sometimes the capacities of the present hardware may not be enough in certain environments. Just watch Video Resource 1 and read this additional advices:


Video Resource 1: How to go to the toilet in crowded places

Okay. So much for the very important beginning. Now to the facts:

Video Resource 2 proves that Koreans know how to jump and to wave their hands. That's an important start so I continued going into more detail by specializing on older people wearing suits:

Posted by Unknown at 8:35 AM No comments:

A kind of magic

Imagine a place that does not exist. Hard to imagine, you think? Actually I've been there. Or maybe not. I don't know - it is fucking magic! Look at this: 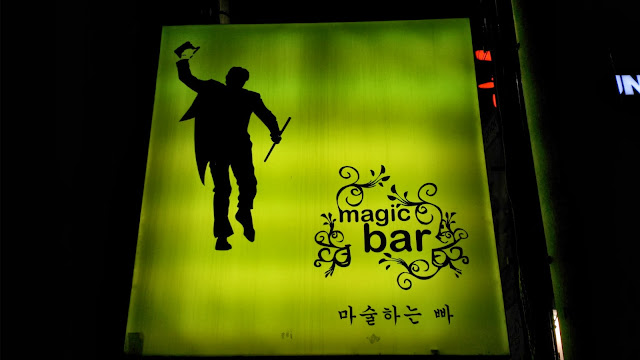 When entering this non-existing place the first thing you see is nothing. No people and lots of empty space. But when we took a seat, the magic started to happen: 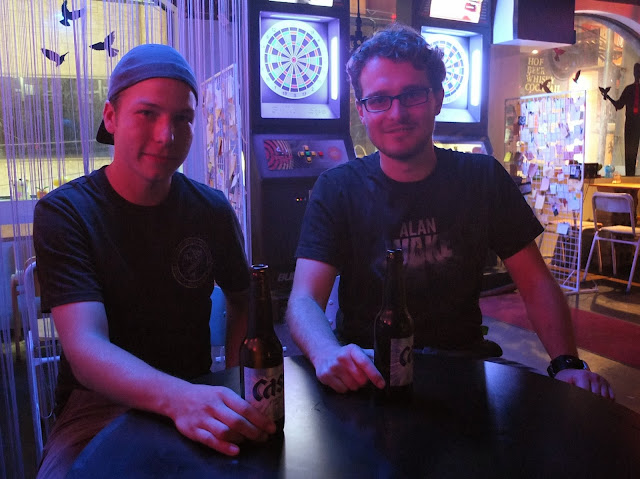 And then within the glimpse of an eye: 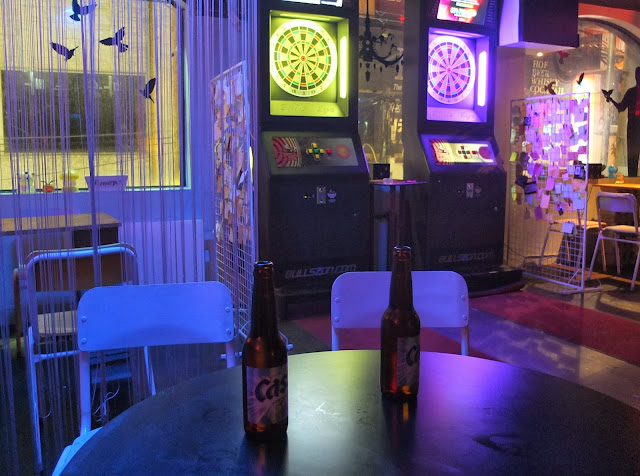 I found this picture within a Zip-File named epäjärjestelmällistyttämättömyydelläänsäkäänköhän and we actually vanished. In some weird places. Like... 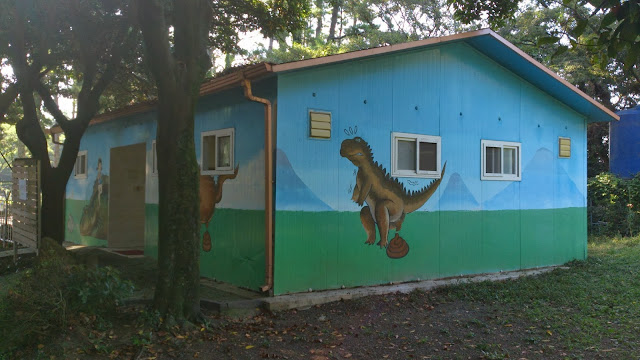 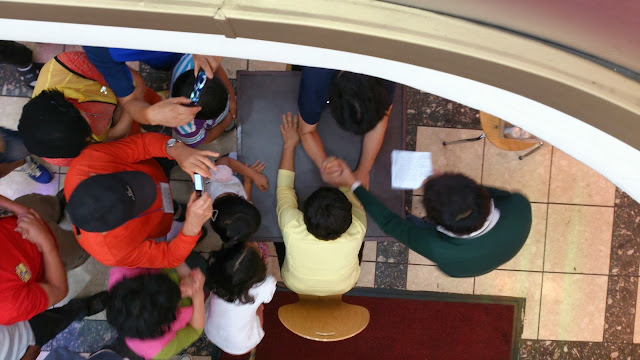 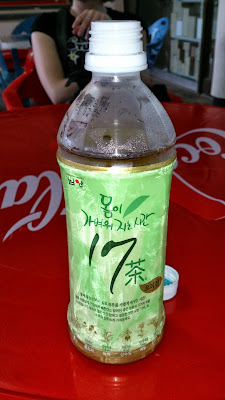 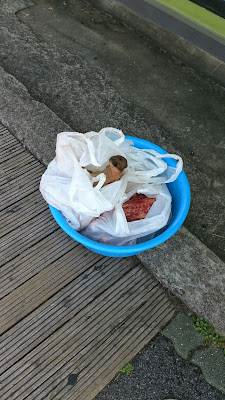 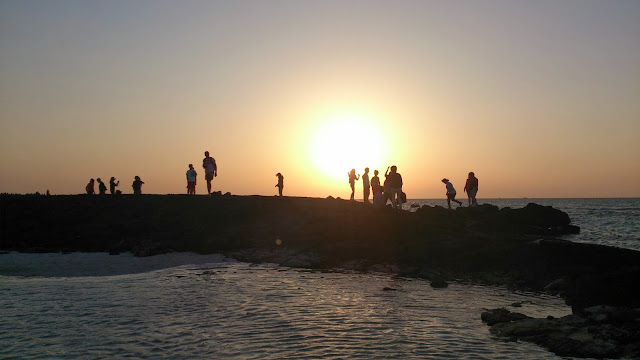 ...and quite much more in our imagination! As you may have noticed, this entry is quite uninspired. So I'll just end this whole mess with a random post of a dinosaur action video.